skip to main | skip to sidebar

For the first time in 2 weeks, I have internet. Don't know what the problem was... don't care... it's working for now.

I hope all had a blessed Christmas & I wish everyone a happy 2009.

Speaking of blessed Christmas's, this Christmas was an unexpected surprise. Things hadn't been going well financially in the Bodhran home & The Wife & I weren't planning on doing much for the kids this year..... just couldn't afford to.

Well, it seems that someone in our church happens to work in a parochial school here in town. Every year, this lady's school collects donations (in gift form) for a family "down on its luck" so that those kids can have something under the tree come Christmas morning.

Usually, the kids sponsored are from one of the poorer schools in town, but this year she decided to sponsor a Catholic family down on its luck from her church.....

When I found out (The Wife called me at my part-time job) I was speechless. Couldn't say a word.

This wonderful lady showed up at our door with 2 large plastic bags FULL of gifts for my children.

Now let me say The Wife & I aren't "destitute".... yet -- each kid had a couple gifts from us & Santa, & if our friend had asked us beforehand, I would've told her that we were alright & asked her to find someone who "really needed it".

Turns out, I really did need it.

For so long now, I've only focused on how rotten people are; selfish, rotten creeps.

This teacher from our church, her students & their parents have made me completely rethink how I view others. I can't assume that people are bad or self-serving when I'm confronted with such kindness from total strangers, & I'll never see others in that dark light again.

I received the best gift of all this year. I've had the burden of bitterness lifted from my heart. While there is still evil in the world, there are a whole lot of folks out there who are willing to make sacrifices for complete strangers, folks who care enough for their fellow man that they give of their time & money so that kids they'll probably never meet can have something to unwrap on Christmas morning. That means more to me than anyone can ever know.

There is more love in this world than I've ever wanted to believe was there.

I've read all sorts of things including posters for escaped slaves, but I've never read one like this before, from the Virginia Gazette, Williamsburg, VA, dated March 7, 1750-1:

RAN away from the Subscriber, in Charles County, on Patowmack, Maryland, Two white Servant Men, a white Servant Woman, and a Negroe Man; viz., Thomas Long, about 5 Feet 9 Inches high, has a Scar on one of his Hands, black Hair, sandy Beard; had on when he went away : He was a Rebel. Patrick Donahow, an Man, about 5 Feet 7 Inches high, has black Hair and black Beard, and a little bald; had on when he went away, . Anne Harris, , big with Chile, she has a long Face, with a Scar on the right Side of it near her Eye; she took away with her , with other Things of Value. Cooper, the Negroe Fellow, is , and about 6 Feet high, has a Scar on one side of his Face near his Eye, has remarkably thick legs, and has lost one of his Toes; had on when he went away . Whoever takes up the said Run-aways, so that I may have them again, shall have Ten Pistoles Reward.
Jacob Andrew Minitree.

I've always known that not all slaves were black, but never before have a seen a poster for runaway "servants" in which one is described as "a Scotch rebel"!

To view the above (and other postings) in it's original (reproduction) form, go to longhunters.com.
Thanks, Long hunters, for keeping history interesting!

So, for your listening pleasure, I've found a fellow who lilts while he plays. This is something I started doing at rendezvous after getting sick of complaining about a lack of musicians... If you can't play with someone else, play with yourself.

Anyway, this guy's quite good.

You Know You Work In A Public School District When...

You pick up your ID badge & the district employee can't spell "Custodian".

According to my badge, I am a "Custodain".

I got a job today. It's part-time, but I knew that when I applied & it's only for as long as I'm in college.

It's for the company in charge of cleaning the local schools.

Why do I feel penitent? Well, without getting too specific or invading the privacy of another, I, without thinking, had a hand in making someone I consider a friend feel even worse than he/she did in the first place.

I apologized earlier today, explained why I said what I said, hopefully without sounding like I was making excuses -- which I wasn't -- & begged forgiveness.

What I did was thoughtless, careless, and hateful. It doesn't matter that it was unintentional. I did wrong & I'm deeply sorry.

This incident has caused me to rethink my outlook on life & people.

I hesitate to write a lot about myself.

(Then why do I even HAVE a blog? I ask myself that, too, to the point where I sit with my finger hovering over the 'delete' button.)

I've shared, with whomever cares to read this excuse for a blog, a few things about myself here, but the things that make me ME, those people and incidents that had a part in shaping the man I am today..... Well, I wish I could talk about some of it, but I just can't, for several reasons: (1) It's just too painful, (2) I don't think anyone else would care, & (3) Most folks have their own burdens & I don't want to add to them.

This time I shared what I thought (at the time) & guess what..... I added to a respected friend's burden. He/She need lifted up, & I helped bring him/her lower. I tried commiserating & I blew it.

See what I meant about not knowing what to say? If one doesn't know what to say, one should say NOTHING!

If I'd remembered that, I wouldn't have added to his/her pain.

It's About Damn Time!

His arrogance has, at last, gotten the better of him. I mean, trying to sell Obama's senate seat in the midst of his on-going federal investigation???

Good God Almighty! If that's not arrogance, WTF is?!

Now can we please get a governor in Springfield whose next stop isn't the hoosegow?

Something with which I've always had trouble is: what can I say to someone who's suffering?

(I know there's supposed to be a ` or something over the 'e', but I don't know how to put it there!)

They're what people say when they shouldn't say anything at all.

That said, I have real trouble when it comes to offering verbal support to friends who are in real pain. What can I say that doesn't come off as sounding cliched?

A friend looses their job... I say, "that sucks!" because I don't want to bring up the fact that I lost mine too, & trivialize their pain by comparing it to my own & maybe making them feel worse not because of their circumstances, but because it could seem as if I'm trying to usurp their misery.

Someone's loved one dies... I say, "that sucks!" instead of, "I know how you feel because I've had loved ones die, too" for the same reason.

I just wish that I had the ability to verbalize sympathy without sounding like a Hallmark card.

I don't have a lot of friends, but the ones I do have I feel a fierce loyalty toward, to the point that I want to "fix" what's wrong, "kill" that thing that's hurting them so keenly, "defend" them from what so often turns out to be indefensible.

(Am I making any sense at all, or is this one of those "stream of consciousness" things?)

I don't like to burden them with my problems simply because I don't want them worrying about me when I know they have problems of their own; most of them much worse than my own.

I'm unemployed, going on more than two weeks now..... A friend of mine has been without work for over 6 months!

I have a sick kid in the house..... I have friends who have things wrong with them that even the so-called doctors can't figure out!

So what can I say?

The only thing I can seem to do is pray. That should be enough, right? I mean, I'm not going to stop praying for you. I just want y'all to know that when I say, "You're in my prayers", that I'm definitely NOT spewing forth a cliche!

It also doesn't mean I'll show up on your front stoop waving my arms around, shouting "GAAWWD!!" at the top of my lungs, or waxing eloquently with a plethora of 'thees' & 'thous'.

Unless you REALLY want me to, you know, scare the bejabbers out of your neighbors...

ANYway, I just want you, my friends, who are in many ways more like family to me, to know that yes, I'm perpetually praying for you (and for myself, too) & eagerly awaiting the time when we can once again enjoy each other's company.

Had a great weekend.

Woke up Saturday morning about 4am projectile vomiting.

I don't recommend it.

Had a couple friends come over

Was feeling better this morning so I went to work.

Yet another hour later because, once again, my hours were cut.

I'm talking to another driver, who I'm surprised to see, hadn't left the dock yet. She's had her hours cut also, but now she's waiting for her truck to get back, & it's an hour late. She had 5 deliveries to make between Oregon, IL., Sterling, Loves Park, & then several pickups between Freeport & .......

I'll just say she didn't know how she was going to meet her deadline, 'K?

I mentioned something about "this fucked up company going down in flames".

Well, my boss (uh, former boss) came out of his office asking what I meant about him going down in flames. I told him I wasn't talking about him, I was talking about the company

(Straight Shot Express.... like I give a fuck anymore)

I also told him that conversations I have with other people don't concern him.

He starts in with "you don't do anything around here & when you finally get work you bitch about it!", to which I reply "that's bullshit and you know it!" & "so it's My fault we don't have enough customers anymore and you've cut 2-1/2 total hours from my work day?!"

That's about the time he gets IN MY FACE, which REALLY pisses me off, especially when he accuses me of getting in his face.

Other things were said, including: (me) "Friday's my last day. I'm thru with this fucking place", & (he) "What!?" & after some more indecipherable cussing on his part, I added, "Keep being a prick, ya cocksucker, and I'm done now!!"

Can ya guess what he said then?

(me) "After all the names you've called your employees, AND ME, you're firing me for calling you a name!?"

(him) "I've never called anybody names!"

It doesn't feel all that bad. I mean, I'm not rushing to tell The Wife, but I've already got a lead on another job 2 hours later, & I'm starting college on the 20th of January. I would've been done with that cocksucker anyway!

Now I can call DOT & report the various violations that're on-going at Cheap Shit Express (the squatter living in the Men's room, the unsafe conditions of the trucks, the fact that Stan let's non-CDL drivers drive Class B straight trucks....)

Well, I'd better get back to that job application. Looks like I'll be cleaning schools again. 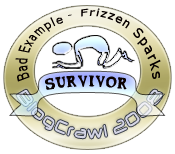 Gathering of the Blogs 2007